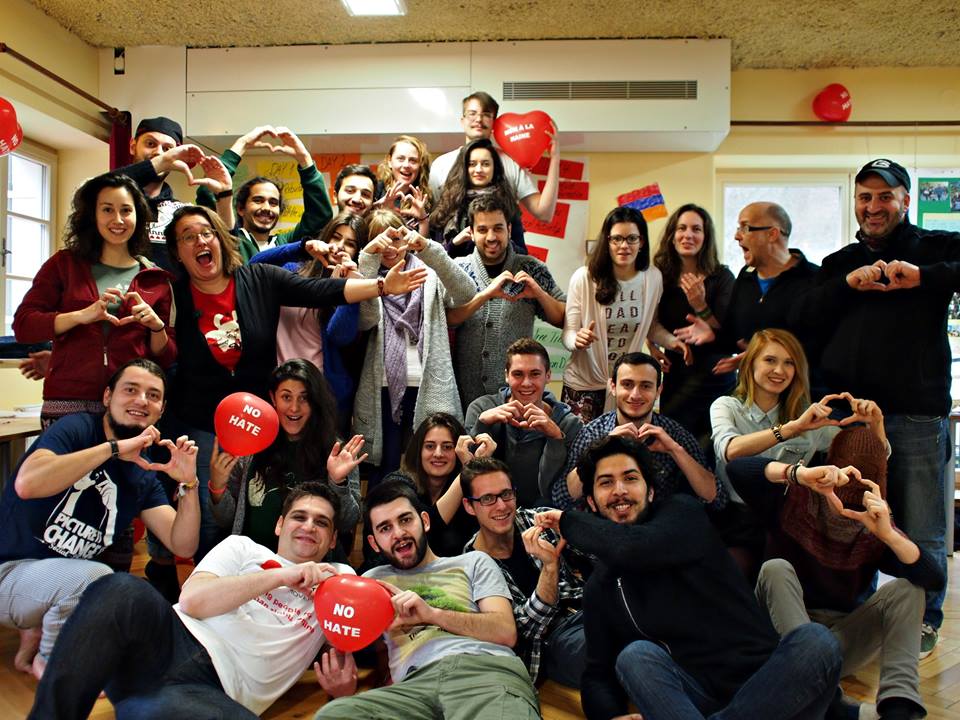 From February 23 till March 2 there took place the 2nd part of the training course called “Hate is Not Our Fate” in Kaprálův Mlýn, Brno, Czech Republic, in Scout Environmental Education Center.
The 1st part of the project took place in Rustavi International Scout Center in Georgia from November 3 to 21.

This time also the same 23 participants from 8 countries were participating in the project. The participants were from Czech Republic, Georgia, Armenia, Montenegro, Macedonia, Germany, France and Slovakia.
The project was financed by Erasmus+. It continued the topic of the first project that is to say to give young people the opportunity of becoming young activists of No Hate Speech, to reflect upon activities planned in frame of project and get experience through participation and interactive learning approaches.

This time the objectives of the project were the following:

– To develop young leaders’ competences in dealing with hate and violence in the youth work and in their communities;

– To develop strategies and activities for involving young people in combating hate and violence;

– To create and develop projects that will be implemented by young people and the partner youth organizations;

– To support the implementation of the long-term projects on the local or international level.
The participants had a lot of indoor and outdoor activities during the projects. First of all, they had presentations about the local activities the participants were supposed to do in their countries after the first part of the project.

Then the participants had 2 main actions:
They made ´´No hate´´ graffiti on the walls of the city. They made one of the Brno’s walls beautiful and very useful by showing to the others messages of No Hate.
They had a discussion in Brno State University with the students of the Faculty of Social Studies about religious themes, about refugees and other different topics within the frameworks of the topic of their training.

The participants had also a meeting with Ombudsman’s Public Defender of Rights, where we had an honor to learn about competencies of a public defender, and his role of a bridge between a person who complains and official public institutions. So, a lot of discussions and seminars were held during the sessions on the topic of the project

All in all, as a result of the project youth leaders and youth workers gained competences to interpret and understand the hate speech as a form of violence and to work systematically in their communities. They became able to fight against, prevent and oppose hate speech and its impacts on the society

You can also be part of projects like this. Join Us!

One Thought to “Hate is Not Our Fate: Success Story: Czech Republic”