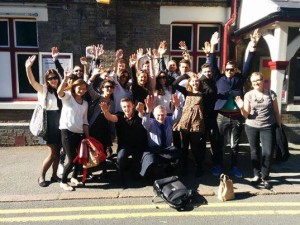 From July 15 to 23 International Leadership Course took place in the UK. The motto of the course was Leadership=Employability. Project aimed at helping young participants to reveal themselves, their leaderships skills, their career ambitions and motivations.
During the programme London hosted young representatives from 7 countries, namely Georgia, Armenia, Azerbaijan, Italy, Estonia, Croatia and Poland. Our country was successfully represented by our volunteers Ani Atabekyan and Mariam Arshakyan.
Young participants lived in a campus called New Land Manor situated several miles away from London.
Training programme was based on a principle learning and having fun, so that the participant didn’t get bored. They had fun and at the same time gained new experiences and valuable knowledge.
On the 1st day after their arrival participants started to introduce themselves to each other and then they were divided into 4 groups for an activity called London Challenge, which would take place the next day.
The 2nd day was a very interesting one because it aimed at giving participants an opportunity to get to know London. They had a small quiz on London’s places of interest for which they made a special visit to London. At the end of the day participants had an amazing boat party and an unforgettable cruise on the River Thames.
3rd day was spent on two important exercises namely IKEA shelves and Personal Branding Session. An exercise called IKEA shelves helped to develop team working and leadership abilities in participants. During Personal Branding Session participants tried to value themselves and to reveal their best characteristics, which would help them to market themselves as brands. At the end of the day participants had an intercultural evening during which they represented their country, its dishes, drinks and traditions. Thanks to Ani and Mariam Armenia was represented in a best way and Armenian cognac and lavash were appreciated greatly by the others.
Challenges continued on the 4th day when the participants tried to get to know  different leadership styles and roles by dividing into several groups and discussing leaderships advantages and disadvantages of different well known leaders. This was followed by an activity called Law of Jungle during which the participants represented Aztecs, Mayas and Incas during which they had to find the best way to govern their tribes correctly and increase its income. The game was followed by Myers Briggs Personality Type Indicator test, which helped the participants to know themselves better and to reveal their characteristics.
On the 5th day the participant had a Media Challenge during which they had to shot a short live talk show. The activity was again based on developing leadership skills as the groups had their leaders, each one of the participants was responsible for some part of the show and they had to manage their budget themselves.
Participants had a meeting with Hayley Dowling on the 6th day of the project, who was the associate director of an investing recruiting agency. She had a lecture on the theme Tips on How to Get a Job. Participants were introduced how to write a successful CV and how to pass and interview.
After the meeting young participants had a coaching masterclass where they themselves were coaches.
On the 7th day it was time to see the knowledge about leadership the participants had got in practice. They had a visit to the Houses of Parliament and to businesses and organizations in the City of London, namely to Llyods bank, to Northern Line and to Lansons PR communication agency.
The last 8th day was spent on speaking about future opportunities and future networks and doing the course evaluation.
All in all we can see that the project was a unique and life-changing experience for our participants. An intensive, innovative and challenging training programme combined at the same time with exceptional social activities and visits.

You can also be the part of our project. Just Join US!