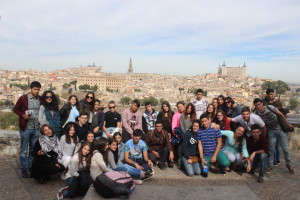 For all of us the project was a successful one. Despite the fact that the hosting organization had only 1 year experience, they managed to organize it perfectly, leaving within all of us lots of sweet memories, joy, sadness and the feeling that somewhere far from each other we wait to meet again.
The exchange was so much full with interesting and various activities including sports, games, fun, nature and culture. In spite of the cultural differences between us and Spanish group, we managed to become one united family. We were starting our morning with Spanish beautiful and energetic music and the way we were starting it (joyfully), we were also finishing it (happily).
The project aimed to gather together 21 Spanish and 21 Armenian young people to learn each other’s culture, to know more about one another, to be united with the help of teambuilding activities and to become more organized and creative.
We had many tours during the exchange. We went to Manzanares, had an amazing experience, where Spanish group organized for us a festival, also a city game was made for us to learn more about the small but pretty city. Pokhara Association did everything for us to know more about Spain, about this young people, who were so close to each other, who were so kind and mature to make you feel proud and exultant.

The project is a continued one and the 2nd part will take place in Armenia in 2016 and will be hosted by Future in Our Hands Youth NGO.