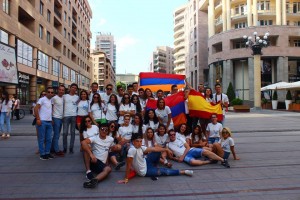 From July 31 till yesterday there took place an exchange project in Armenia named Rhythms of Unity. It took place in Tsaghkadzor and Yerevan. The organizer of the project was “Future in Our Hands” Youth NGO together with Spanish “Pokhara” association.
The project aimed at helping Armenian and Spanish youngsters to reveal their hidden abilities and develop their skills in the sphere of dance. Another important goal of the program was to establish mutual understanding and friendship between representatives of 2 countries. During these days the participants learned a lot of new dances both Armenian and Spanish as well as exchanged their experience in the sphere of dance because some of the participants of the project were professional dancers.
The schedule of the project embraced not only wide range of dance workshops but also a lot of fun activities and energizers to make the learning process also very interesting. What is important is that the project paid much attention to the interests of participants. As a result they were divided into 2 groups according to their preferences of dance. So the participants learned and at the same time had a lot of fun. Moreover, two countries had a nice cultural representation about their countries’ traditional songs, dances and food.
The outcome of successful cooperation of Armenian and Spanish youngsters was presented to public with a dance containing elements of Armenian and Spanish dances on the 8th of August at 18:00 in Northern Avenue.
One of the participants said that they were having a wonderful time with wonderful people. The schedule of the project was interesting with full of useful workshops and they didn’t spent even a minute in vain.
According to other participant the project was a great opportunity for him to learn a lot of things from his new friends, why not new language and a lot things about cultural peculiarities of other nations.
The leader of the Spanish group said that the project was a real challenge for her group because they were not professional dancers. Besides it was the first time for them to be abroad and to face different culture.
Everybody enjoyed the project and nobody wanted to return home. Participants happily announced that their day was so full of fun and interesting activities that they didn’t feel how the day passed. They felt happy, crazy and confident. The project gave them the opportunity to express themselves freely.
The exchange program, which was funded by Erasmus+ project was organized by Future in Our Hands NGO in Armenia and “Pokhara” association in Spain
The nice rest of the participants, the tasty food and the comfortable accommodation was provided by the hotel Writers House in Tsaghkadzor and JR’s house in Yerevan.