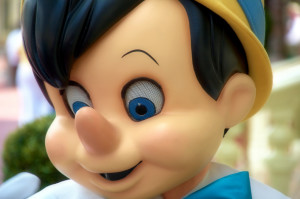 8 Proven Indicators Someone is Lying To You

There’s a good chance that anyone reading this has told a lie at least once in their life. Whether it was a little white fib or a convoluted, George Costanza-esque whopper of a tale, stretching the truth is something the majority of us do from time to time.

But would you tell so many lies if you knew how easy it is for others to tell you’re lying? Believe it or not, your body gives off a number of telltale signs when you’re lying- most commonly without you even realizing it.

If the person you’re talking to exhibits any of the following, you might want to take their words with a grain of salt:

1. They quickly change their head position

When a person is asked a question and they’re preparing to lie when they respond, they’ll often move their head in an unnatural and uncomfortable manner. Whether they retract or jerk their head back, or bow it down, it will often be a sudden movement that contrasts with their previous body language. In doing so, they may be trying to avoid eye contact, and also reacting nervously to a question they don’t have a good answer to.

2. They change their breathing pattern

When a person is lying, they become hyper-aware of the situation which forces their heart rate and blood flow to change. This tension also causes their breathing to become very heavy and labored. Watch out for them taking deep breaths, and listen to their voice, which will get more and more shallow as their breathing gets heavier. Such an involuntary, and otherwise unprovoked, change in their breathing pattern is a surefire way to tell someone isn’t telling the truth.

You’ve probably heard of your body’s primitive ‘fight or flight’ mechanism. Liars who stand perfectly still are exhibiting the ‘fight’ defense, as they feel as if they’re holding their ground. During normal conversations, most people are relaxed and fluid in their movement. However, when lying, we often enter a rigid physical state because we feel as if we need to prove something. It’s a sign that we’re on guard, aware of every minute movement we’re making in front of someone we’re lying to.

4. They repeat words or phrases

Liars will often repeat themselves ad nauseam when telling a half-truth or a complete falsehood. This is done for three reasons. First, they will repeat a lie over and over in order to solidify the ‘facts’ in their mind, so they can stick to their story. Secondly, they’re trying to convince you that they’re telling the truth by solidifying their words in your mind. Lastly, they repeat themselves in order to buy time to come up with the next part of their story. If they were telling the truth, they’d be able to recall everything without thinking about it.

5. They cover their mouth

When a person covers their mouth while speaking, they’re more than likely hiding something. Subconsciously, they’re putting a barrier between themselves and the person they’re talking to. It’s as if they’re shielding themselves from being heard, or making it seem as if they’re not actually saying the words that are coming out of their mouth. If a person puts their hand over their mouth while answering a question, they might be withholding information from you. Lies by omission are lies nonetheless.

When a liar covers their neck, head, or chest, they’re exhibiting the ‘flight’ mechanism I mentioned earlier. Contrasted with the ‘fight’ response, being in ‘flight’ mode means a person does not want to be in the current situation they’re in. They feel physically uncomfortable and exposed, and are instinctively protecting the most important parts of their body. Watch for what a person does with their hands while they’re talking, and you might be able to catch them in a lie.

7. They shuffle their feet

Not only should you watch a person’s hands while they’re speaking, but also check their feet during the conversation. This also has to do with the ‘flight’ instinct, as shuffling feet is a sure sign a person wants to bolt from their current situation. According to behavioral analyst and body language expert Dr. Lillian Glass, shuffling feet is “one of the key ways to detect a liar.”

When a person gives too much information when questioned, it’s because they have rehearsed in their head exactly what to say, and exactly how to say it. They also feel that if they’re able to give a full story, they’re more likely to be believed. However, this often just shows they’ve anticipated what the other person will say next, and jump right into answering subsequent questions before the questions have even been asked. If someone seems to immediately have every answer for all the questions you have for them, they’ve most likely constructed a huge lie in their head and are ready to stick to it no matter what.