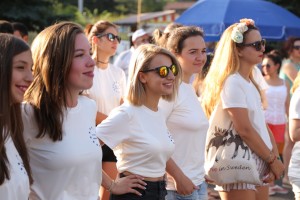 The main aim of the project Raise Your Voice was to help the youngsters raise their voice for the problems of youth and for the European values with the help of different types of art, which at the same time gave the participants and opportunity to get acquainted with each other’s culture. The project helped the participants to establish good relationships between themselves and cooperate with each other. During the project they taught each other their national dances and songs this way introducing others their cultural peculiarities.
During the first 6 days of the project a group of participants prepared joint dances which were based on the national dances of participant countries, another group prepared thematic photos, where there were pictures of children from different regions of Armenia. And the third group prepared flyers depicting the main aims of the project and different European values. All this was presented to the public in the form of a festival in the main square of Tsaghkadzor. The festival aimed at informing the people about the project and spreading European values among them.
Besides the participants in our festival participated also the band “ETE” with its modern covers of Armenian folk music, as well as “Dos Amigos” dance club and “Salsa Viva” school of social dances. They organized latin dance open air lesson in the second part of the festival.

The project was a success and the participant enjoyed it greatly. Hereby we are presenting the feedback of some of our participants:

Etje Van Toorn, Netherlands -“ I gained much information of different countries from the project and learned a lot of myself and others. My goal was to improve myself and help others and I reached my goal. I loved my stay in Armenia because of everything”.

Robin Raymund, Turkey- “I gained knowledge about other countries and cultures. I also, learned some new things in art. My goal was learn something new and improve myself.
I really enjoyed the project.”

Ulaş Genç, Turkey- “I gained how to dance, how to be part of a team, how to respect and react different things with kindly. I discovered and improved myself.
My goal was to learn new things and make new friends. Result: I’ve learned more than I could ever guess. (Qochari, fox car, wedding, baptism etc.) I didn’t make friendsI found a family and second home. Local people were apprehensive when we approach them. Because they did not know us. As we approached them, danced with them, shop with them, when we say hi they show us their warmth as we show our common points. And the most important thing I learned about Armenia and Turkey as a Turk is that we are 2 children of the same mother. We came from the same soil. Absolutely I will come again.”

Sarah Akizi, France- “I’ve learnt a lot about Armenian culture. Concerning the project, I know now how to dance (even if my choreography was so bad ) and I am more self confident with others (sharing ideas, respecting others and so on…). My first goal in being a participant in that project was to discover Armenia. Then I wanted to learn more about the main topic by doing workshops and why not energizers. I also wanted to meet new people and know more about their own culture. : I have a highly good feeling about Armenia and this youth exchange. Thanks to the organizers, we had the occasion to visit different and very interesting places (Garni, Gerhard, Yerevan…). Everything was well organized : the festival, the farewell party, the workshops… I do not regret my venue to Armenia! I wish I could come back one day to discover more about the amazing Armenian culture.”

Jana Šestáková , Czech Republic-“ I’ve gained many new friends, learnt more about different cultures, learnt more about European values. I also got a great experiences from the various workshops. I went to Armenia to learn more about the topic and about the country. All the goals were fulfilled to the maximum. I absolutely loved Armenia. It was one of the best projects I’ve ever participated in (And I’ve participated in many )”.

Levon Tovmasyan, Armenia- “I learnt about culture of other countries and gained new friendships and connections. My goal was to meet good people and communicate with them, but I found a big family which is more important and I already miss the participants. Their support is something crucial that will help me even after the program. I enjoyed my stay and I am thankful to the organizing team

Oscar Elsenburg, Armenia- “I learned to speak Armenian better, learned to dance( a little bit) and learned a lot about different cultures. My goal was to motivate others and improve myself and I succeed. I love everything about Armenia and i consider it as my second home”.

Marc Bell, France- “I am greateful to say that I visited Armenia for a good 10 days. And it was amazing to me to represent France and the black community. I personally gained the confidence to be a global youth leader in my own way. I gained the global understanding of living and working with a group rich in diversity including gender, religion, sexual orientation, ethnicity, background and nationality. I even got to learn dome Armenian words and dances, met amazing Armenian people. I came to Armenia with no specific goals. So… I had no expectations before my arrival, I gained the habit of not creating expectations in order not to be deceived, not to have prejudice by doing research before travelling. I met the salsa lovers community. I met beautiful people. I became richer”.

The project was financed by Erasmus+ program. And the participants were chosen according to their motivation letters.