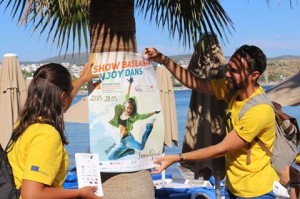 Between the 23rd and the 28th of May, famous touristic Bodrum hosted the 18th International Bodrum Dance Festival (IBDF).To celebrate this special day every year thousands of tourists from all over the world came to Bodrum. This year also the 18th International Bodrum Dance Festival (IBDF) was held on an international platform. In this beautiful city cultures from all over the world were united by dancers, performers, journalists and volunteers.For six weeks, Turkish professionals cooperated with volunteers coming from 17different European countries to organize this event. Armenia was among the countries involved in the program and was successfully represented by Anna Shakhkyan and Vanush Karapetyan. They were chosen during the competition organised by Future in Our Hands in cooperation with Mi Morena Larin Club in Yerevan. Selected 6 candidates passed to 2nd round. After the IQ test only 2 participants were chosen to represent Armenia.

The participants’ accommodation and tutorial were provided by the European Union’s education and training programme Erasmus+ in the frames of EVS project.

During the EVS project volunteers’ task was to promote the opportunities of the IBDF and Erasmus+ programme in cultural centres, schools, media, and on Bodrum’s streets. Festival’s organization was partly on volunteers’ shoulders who and in this way they had a chance to show how much power was hidden in movement and dances. Many volunteers of the project, such as Vanush and Anna were active dancers for years and they got the valuable chance to perform on stage during the festival.

They were actively participating in all the events and thanks to them other participants of the project learned a lot of things about Armenian culture and history. Besides performing a lot of dances in Armenian traditional costumes, they also made a lot of people interested in Armenian culture and dance Armenian dances. Armenia was successfully presented by them also during the intercultural evening, where Armenian brandy, basturma and lavash were the most required ones among the other participants.

The project was very helpful for them as they got a lot of new skills. Now they can put the newly adapted skills into practice in Armenia and make themselves useful by working for the social inclusion of minorities. Living in intercultural groups and communicating with foreigners created the perfect environment for accomplishing the highest purpose of the Erasmus+ programme, namely to improve cooperation between young people and countries, be aware of others’ customs, avoid prejudices and grow tolerance.

The EVS program, which was funded by Erasmus+ project was organized by Bodrum Dance Club in Turkey and the Armenian partner organisation was Future In Our Hands NGO.